This past weekend, our family got to experience the Star Wars Rival Run weekend.  I’ll do a bit of a split review since we tackled both the kids run and the half marathon.

runDisney revised it’s race expo process this race.  Upon entry into the Wide World of Sports, bib pickup was located in the Arena, followed by shirt pickup and expo vendors in the Visa Athletic Center.  Hooray for only having to go into two buildings versus three!  I do think there is room for a great variety of merchandise to be added at the vendor expo area.

Saturday was race day for the kids races.  Dressed in their Star Wars gear, my kids all held hands and jogged excitedly to the track.

It was really awesome to finally be able to share in a runDisney event with them- they always hear me talking about the run events but so special for them to get to experience it themselves.  runDisney did a great job with the DJ pumping up the crowd and leading group stretches.  We had soccer games at 8:30 that morning and noon so we had to move all of our boys into the 10:30 race.  runDisney was amazing and totally flexible.  It was clear this was a fun atmosphere – the kids are actually told they have an hour time slot to run their races and then play games while they wait!  The groups lined up for the 10:30 race – first were the solo runners without parents and next were the runners with parents.  The horn blew and it was a fun exciting sprint.

The icing on the cake, especially for the shy guys, was having Mickey at the end near the finish line.  My sweet third son had adamantly refused to run that day until 30 seconds before the start when he realized he could give Mickey a high five at the end.

Sunday morning was half marathon time.  I always struggle with finding gear for the Star War race.  I just feel overall there is a serious lack of decent Star Wars womens tanks tops.  If you ever notice, most of my race gear can be repurposed or de-constructed back into regular workout clothes post-race.  At the last minute I decided against what I had picked up at the expo and wore one of my favorite shirts, “Stars Can’t Shine Without Darkness.”  We buzzed to the start line and I was so excited I honestly forgot to take a lot of pictures coming in. 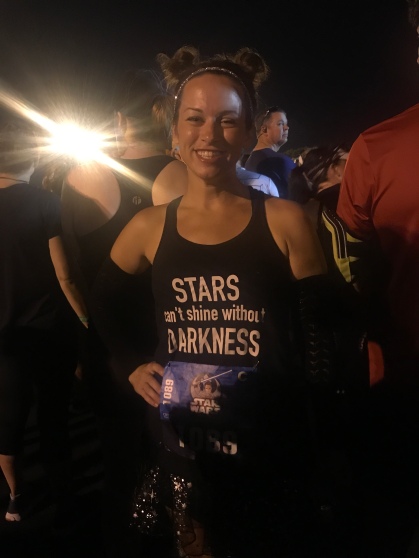 Matthew and I went into this race vowing to run together. He had run the Disney half in January and I had run the Princess half in February so we wanted to stick together.  The last race we ran together was at least 7 years ago.

Matthew was extremely gracious and said he would try the Galloway run-walk-run method that I swear by.  Future note:  Matthew starts strong and steady for races, I start slow and speed up as the race goes on.  Needless to say it will probably be our last long race together as halfway through we realized we were running in opposite styles.

I was so happy though as there were several times throughout the race we easily could have parted ways (code word: Death Star) but instead chose to keep going together.  I think it’s why I was so upbeat in our race pics. 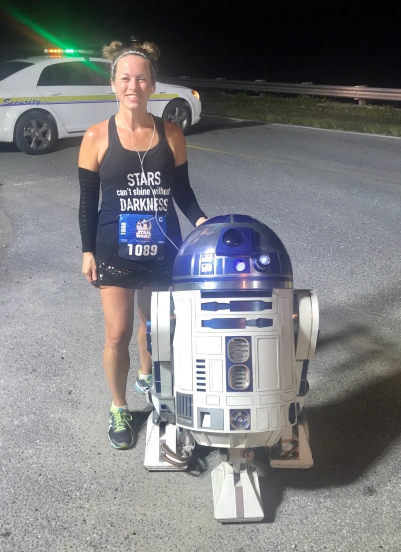 The race was super muggy.  Around 70 degrees with 97% humidity at the start….so starting slow was a good call for everyone running. Twice running up hills I happened to find myself behind a man wearing a “I can do all things through Christ who strengthens me” shirt which I found to be incredibly inspiring. 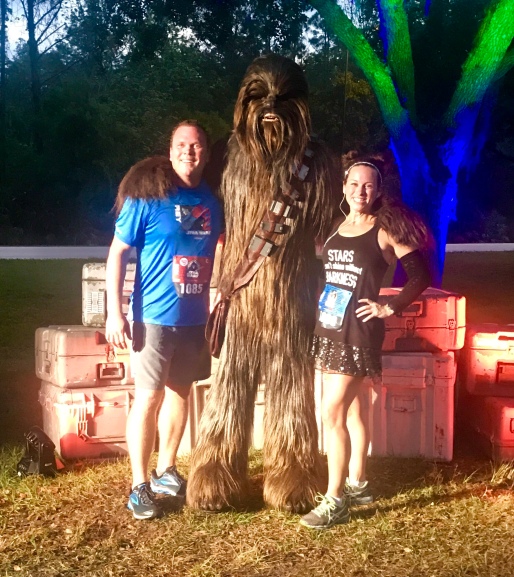 One a whim I decided to Facebook Live through the end of the race.  While we were running I was reflecting on a friend who had mentioned she enjoyed seeing my race info as she was not able to run them herself.  I figured that if someone watching could just get a bit of the same amount of joy I was feeling, then it was a good day.  My heart really does get overwhelmed with happiness at the end of a race.  Now for some post race pics!

That mostly closes out the standard Florida race season for me!  I’m hoping to do the Windermere 5k this weekend and then the heat is going to really crank up which means time to take a running break.  I’m guessing my body will thank me for the rest! May the force be with you!