With the runDisney Star Wars Half Marathon coming up this weekend, I was reflecting on how far I’ve come as a runner.  I remember when I first started – it came to me clear as day.  It was early January after college graduation and I was sitting at my apartment desk wondering what I was going to fill my time other than the two jobs I was working (HA).  I decided then and there I was going to do a half marathon and signed up for Cincinnati’s Flying Pig.  Here’s what has changed over time…and what has not!  At the end I’ll list off some favorite races…

Training – I started with and still to this day do Hal Higdon’s running programs.  They are split by race length and experience level.  I don’t use his entire program, I modify it where I only run three times a week – a 3 mile run, a middle length run, and then a long run on the weekend!  Two years ago I had my gall bladder taken out three weeks before a half but still wanted to run.  I discovered Jeff Galloway’s Run/Walk/Run method and have never looked back.  I personally think it’s amazing and my times and stamina are much better than before!  The biggest benefit is I find there is much less mental fatigue.  In the past I would dread the last miles where now I just tell myself “3 minutes until a walk break!”

Shoes- I spent enough time in organized sports that I knew I at least needed a good pair of running shoes when I started.  Those $30 clearance shoes at Kohl’s were not going to cut it.  I originally started with Peral Izumi shoes (which were AMAZING), switched to Asics (basic), and now have found the most incredible pair of shoes ever.  I was gifted a pair of On Cloud’s which are the lightest and most comfortable shoes I’ve ever worn.  Unfortunately those are not the best for longer distances, so I’m hoping, after I scrap together more of my running budget, I’ll eventually try these Nike Air Zooms out.  I tried them on at the last runDisney expo and loved them. 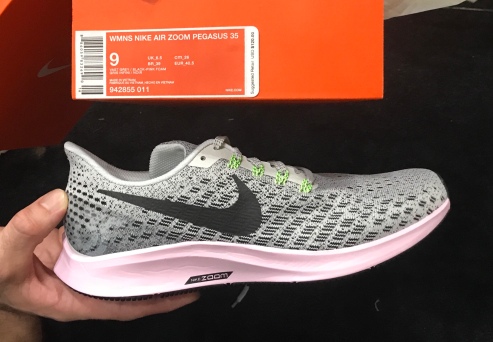 Clothes – Let’s just take a moment and admire this amazing photo documenting my first race – the Cincinnati Flying Pig Half.  Which I ran wearing cotton cheerleading shorts – just stellar.  People spotted the amateur from a mile away!  Now I typically stick with dry-fit runnings shorts or skirts and tank tops.

On the course – I will fully and shamefully admit I did not start carrying water with me during half marathons until this past year.  Because I didn’t want the burden of “carrying something.”  Living in Florida doesn’t provide as much forgiveness in this area and I was forced to carry water during long training runs.  What a world of difference!  Now on longer runs I will typically drink about 20 ounces each run and feel tremendously better, especially during the second half of the run.

Other gear-  I wear Sweaty Bands constantly (even not when running) and they are a dream!

I always apply Body Glide on my arms/legs before a race.  Humidity can be unforgiving after many miles and it helps keep friction down.  I do carry my iPhone during every run.  I recently purchased this Nox Tracer for when I run in the early morning hours and I love it.  I don’t run too often in the dark but I found it comforting that should anything ever happen to me while I was out on a run, EVERYONE who drove by would have seen me versus no one.  It’s also great for family bike rides at dusk.  I also just started wearing Goodr sunglasses while I run and LOVE them.

Apps – Forever I’ve used MapMyRun to track all my runs.  Santa paid extra close attention to my requests this year and Matthew kindly got me a Garmin! Woo hoo!  Still just as good at tracking how much sleep I don’t get….but I digress.  I track my runs now with both apps concurrently.

Other general tips – Break in your shoes before running a race in them.  Don’t train drinking water and then decide to switch it up to Gatorade on the course.  Trust your training – lots of people give advice before a race but you know what is best for you.

Onto my favorite races!

First ever race: Mercy Heart Mini 5k – it just knocked my socks off to see soooo many people come together for a great cause.  Everyone had been training on their own and then united as one!

Favorite all time race: 2017 Disney Princess Half – first Princess half and also my current PR

Most meaningful race: 2018 Cleveland Half which was the first year my brother did a half! Our whole family was there!

Best post race moment: I was at a small 5k when they were giving away 4 Disney Park Hoppers – a HUGE award for such a small group.  They called the name…and got nothing.  Waited, waited, waited…called again.  There was talk of a redraw when all of the sudden this little voice came running from outside.  It was a young girl who had entered the raffle and won!  Smiles and hugs all around.

Best course: I’m partial to the Cincinnati Flying Pig.  The crowd draw is great and the route is unique and changes a lot.  Pay no attention to the hills.

Favorite virtual run series: Being a mom to four young kids means packed weekend schedules.  Which is why I LOVE doing virtual races with Potterhead Running Club – the Harry Potter themed running series.  Their causes and medals are fantastic.

Race that touched my heart: Mother’s Day Trail run with the best ladies from my running group.  It was impromptu, it was super muddy, and it was awesome.

Top family moment: Cleveland Zoo 5k last summer with Matthew, my two oldest, and my mom.  Just about everyone placed in their age group (except yours truly).  There were awards, raffle prizes, and animals.  Super proud of my oldest as he absolutely crushed it and it was his first 5k!

Happy running everyone!  See you out on the course!

3 thoughts on “10 Years of Running Has Taught Me…”