You know how you have those days where things seem a bit off at the start and you brush them off?  And at the end of the day after numerous failed disasters happening throughout you realize you should have seen the writing on the wall from the first moments!  Welcome to our most recent staycation!

With our Disney passes ending soon, the boys and I had plans of heading to the park each day this week.  After a 20 minute traffic delay on the way to Epcot and what appears to be impending weather from the movie “Twister” we decide it will all be easy breezy and tough it out.

Was that evening a full moon?  A quick Google search appears that indeed last night was a full moon.  Well noooooo kidding.  For whatever reason, due to the weather or whatnot, several of my kids are acting like they have never been to a theme park in their life and are on loopy pills.  It’s all good in the hood.

We hit up Spaceship Earth.  I quickly realize that my 4 year old has selected for us to listen to the narration in German.  This was actually a blessing in disguise because as I narrated for him, I realized how quite scared he had been of the ride.  So now, according to my version, the people of Spaceship Earth are doing things like: using that fire to make smores!  Seeing who can wear the biggest fluffy hat!  Painting and playing music just like you did in preschool!  Totally fun stuff.

Immediate torrential thunderstorm ensures.  Terrified kids everywhere! Luckily, we had hit up a character picture and my stroller was located indoors. I am going to erase the 20 minutes of monkey gymnastics on mom that was waiting in line for this pic.  Disclaimer that I really really like Joy and Sadness so it was totally worth it 😉  Woo hoo! One of the happiest places on earth! 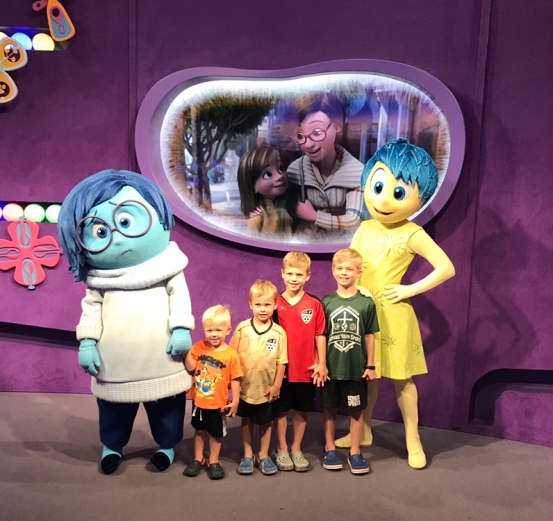 (in Ross Gellar voice:  Have you BEEN to a Disney park before! Seriously act like it people!)  Yes…he asked for and posed for this picture.

For whatever reason, whenever we head to a new ride, my one child declares: I don’t want to ride that ride! Which is met with me saying ok and proceeding to that exact ride. High point for when we all ride Frozen (finally!) and I have three kiddos clinging to me out of fear.  “Next time leave me at home with Dad.”  No prob, dude.

We make our last attempt at a ride in one of my favorites, the Three Caballeros, but it’s closed.  Quick stop for some churro bites and a much needed sangria for mama.  I’ve said it before but worth repeating – the drinks in Mexico are definitely a great value for their money.  At this point my most rebellious son of the day declares “Mom this day is the best day ever!”  Cue unbelievably incredulous look on my face followed by burst out laughter.  Of course it is!

Let’s all now reflect on what easily by a landslide was the most fun thing of the day according to my kids: 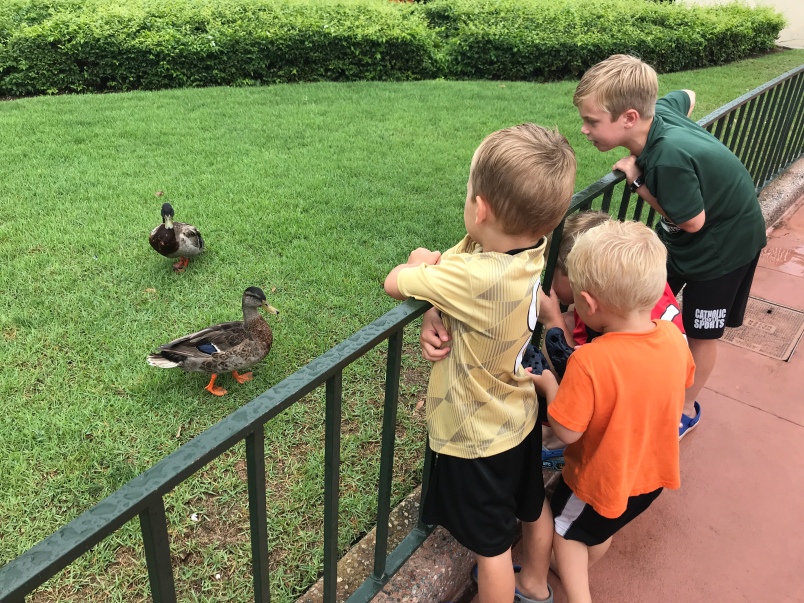 Also had another gem of a moment when I was wondering what in the world my kids were doing and they excitedly showed me this! It was very cool 🙂

Popcorn stop for the ride home.  We’re now starting to see the sun poke through the clouds which means it’s time for me to go home, dry out our raincoats, and put everyone to bed early.   Because tomorrow is Magic Kingdom and I need some time to mentally prep myself and bring my A game.  Once again, today would not have been possible without the help of this little angel!