After many months of training, the Disney Princess Half Marathon did not disappoint this past weekend!  I was very blessed that I was able to get a spot in the Princess Half as a transfer from the Disney World Half Marathon in January which had been cancelled the night before the race due to severe storms.  Disney races are very unique in that I’d say their emphasis for the majority of runners is on the FUN portion which of course they are experts at!  I found myself in a smaller portion of the attendees who were trying to set a PR (personal record) at this race.  I’ll run down a bit of everything:

The Expos at RunDisney events are extremely nice and definitely worth spending the time to enjoy.  Only tip I’d have here is to print your waiver ahead of time at home so you are able to skip any long lines to enter. I had to get a picture with the man himself, Jeff Galloway! I had just started using his training the month prior and found it to be life changing.

*Read below for details if you need to prepare for race day or scroll down for fun pics!*      The morning of race day, I set my alarm for 3am as the race start time was 5:30am.  I wanted to give myself a LOT of extra time so any last minute rushing didn’t amp up my pre-race jitters.  I learned after doing  the Princess 5k last year that I preferred a costume that is actual workout clothes I can use again.  This year I went as Princess Aurora from Sleeping Beauty.  I bought a tennis dress and some Under Armour shorts, compression sleeves that I loved, and a $1 crown from JoAnn Fabrics.  After that I attached some fabric using Hollywood Fashion Tape and away I went.  A very important tip is that I make sure to run in each item I’m going to wear on race day at least once prior to the race…just so there are no comfort issues.

Back to the race.  I’ve found port-o-potties at RunDisney races can be very hit or miss.  I’ve waited the range of 5 minutes to one hour in line.  So my strategy this time was use the restroom immediately, then hit up a line for a character pic.  The character pic was for Belle/Tiana (they alternated) and that took about an hour wait. Time here is about 5am. 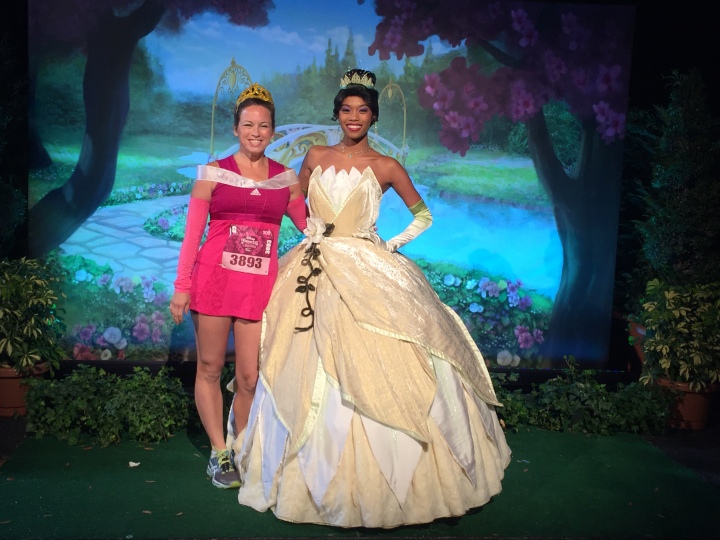 A half mile walk to the start line and I made my way to Corral G.  I did overhear that you’ve participated in a previous RunDisney race, RunDisney will use that for your corral time before using a non-Disney race time…which also explains my corral placement after my post gall bladder removal Wine&Dine race haha.   I’m unsure if that’s true but definitely good to know.  I did catch a few runners who stepped over the corral barriers and snuck into higher letter corrals (shame, shame, it knows your name).  I’m way too much a nervous nelly to do that type of thing. 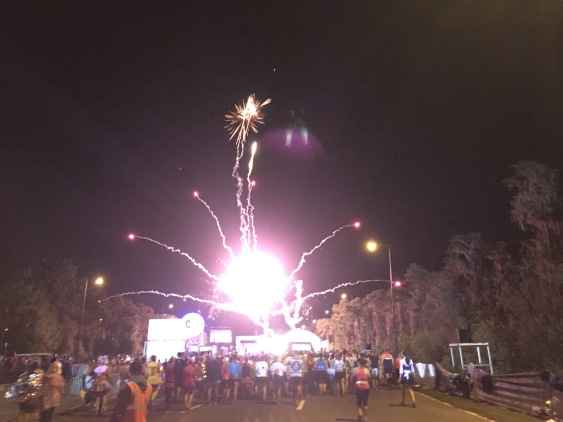 After a brief delay due to some traffic holdups, it was off to the races.  I spent a good portion of the first two miles doing super very fast strategic weaving.  I tried extremely hard not to weave more than a few feet to the left and right because the extra mileage adds up quick.  Onto some glorious pics…..the first half of the race I was smokin fast.  I used the Jeff Galloway method of running 3 minutes/walking 30 seconds and I’m sooooooo glad I did.  Here’s an action shot: 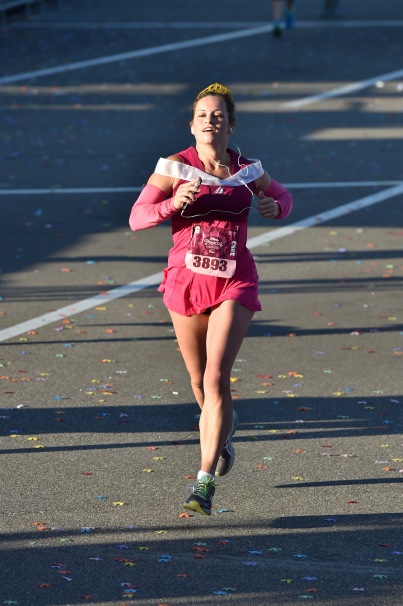 The picture below is right before entering Cinderella’s castle….I had just waved to Anna, Elsa, and Olaf who were standing high up on the castle. 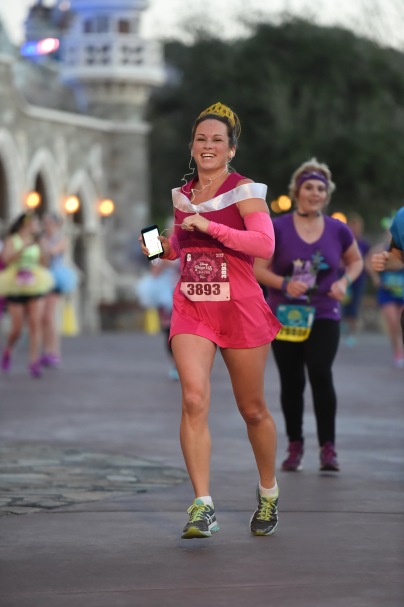 I had heard horror stories of the race coming to a walking halt through the castle, hence why I was sprinting so fast at the start but it paid off because I cruised through with no problems!  I was so high on adrenaline that I didn’t realize I was running though the castle until I was about 3/4 of the way through….which I’m pretty sure you can see by the look on my face.

Let’s talk about one of my happiest moments in the race…or as any bystander might be worried to see what appears to be the saddest runner in the race.  I feel like I’m not the most publicly emotional person other than the emotions of happy or sleep deprived crazy. So in case you haven’t seen this look, it’s called: I’m so ridiculously happy to be here I could cry but I can’t cry because I’m running a race.  Look at that frown of joy!!!! I just ran through Cinderella’s castle! Yay!

Eight miles later I made it to the finish line.  I’m not usually one to make a big spectacle at the finish line but dang it I worked extremely hard the last six months to get here so this was what I ended with:

Follow that with that same frown of joy as I crossed over the finish line.  I was so overwhelmed I could barely talk and was trying to hold it together.  My PR and final time was 1:57:39….in my 10 years of running half marathons, it was my first ever race under two hours.  I finished 102nd out of 3,264 women in the 30-34 age group which was the top 3% woooooot.  One important note….I noticed when I did the Disney Wine and Dine Half Marathon that my GPS registered I ran an extra .35 miles so I had mentally added in that same amount of distance to run so I could keep my pace on track to finish under two hours.  I’m glad I did because my final GPS distance was 13.48 and it was good I buffered in an extra 2-3 minutes to finish at my goal time. Here’s a post race shot with a smile:

I was very strategic that I did not stop for any character pictures on the course so I went to Magic Kingdom right after the race to take a few more pictures.  Being there was more awesome than I could have imagined.  So many Cast Members and guests said congrats, it really did make you feel like Disney royalty. 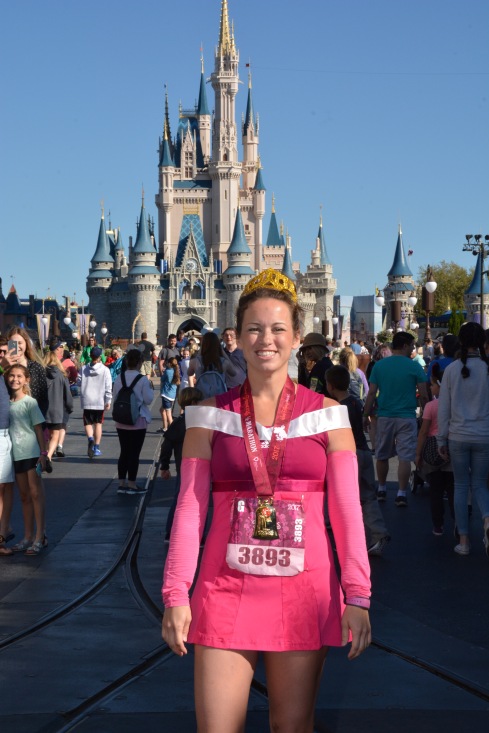 I had some awesome jams this race but some of my faves were: Shape of You, What A Beautiful Name, Formation (best workout song ever), Way Down We Go, Who’s the (Bat)Man, How Far I’ll Go/Moana (best running song ever), Invincible, The Greatest, and finished listening to oldest son’s favorite song, We Know the Way.  For the record, I get my fastest times during What A Beautiful Name.  It’s inevitable…and that moving…despite it being a very slow song.

I’m off now to learn the Shape of You dance…legit goal.  Stay tuned for my next post as we’ll be checking out Disney’s Blizzard Beach just in time for summer vacation planning! Yahoo!!!!

PS In case you were curious, the following characters were at the race: Belle, Tiana, Pocahontas, and Merida at the starting line.  Jack Sparrow and another pirate, 4 princes, Royal Men with Glass Slipper, Mary Poppins Penguins, the Beast, Gaston, Queen of Hearts, Cinderella and Prince Charming, Mushu from Mulan, Princess Daisy Duck, Toy Soldier from Toy Story, Genie from Aladdin, and maybe a few more I can’t recall. One warning if you ever are running Disney races and get in line for a character…they DO switch out characters after a period of time so there is a chance you could be in line for a character and someone else come out.  In case you are watching your run time, this might be important to know!

3 thoughts on “Disney Princess Half for Runners”